NEXT AT THE KENNEDY CENTER : A Joni Mitchell Songbook 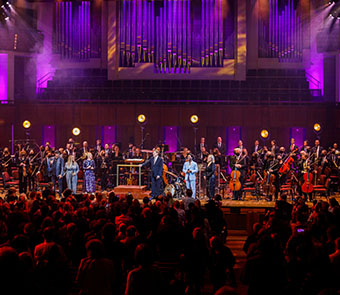 The timeless work of Joni Mitchell is celebrated with an all-star lineup at the Kennedy Center.

The indomitable influence of Joni Mitchell is celebrated with an all-star lineup at the Kennedy Center, led by multi-Grammy Award winner Vince Mendoza and accompanied by the National Symphony Orchestra.

The timeless and genre-defying influence of Joni Mitchell’s artistry is celebrated with an all-star lineup at the Kennedy Center, accompanied by the National Symphony Orchestra led by Grammy Award-winning composer Vince Mendoza. This heartfelt tribute to the folk and jazz music legend reflects upon Mitchell’s orchestral recordings of “Both Sides Now” and “Travelogue,” which realized a meditative and hauntingly expressive tone to Mitchell’s seminal works. Featuring unique renditions of some of her most beloved songs, such as “A Case of You,” “Woodstock," “River,” and “The Circle Game,” the program includes performances by Lalah Hathaway, Renée Fleming, Jimmie Herrod, Raul Midón, and Aoife O’Donovan. Beyond the Concert Hall stage, “A Joni Mitchell Songbook” explores how the raw vulnerability and intimacy of Mitchell’s work served as a roadmap for fans and future generations of singer-songwriters. A diverse array of musicians and collaborators share anecdotes about Mitchell’s influence on their art. This program will be achingly relevant, showing how her emotional authenticity echoes more powerfully today than ever before.