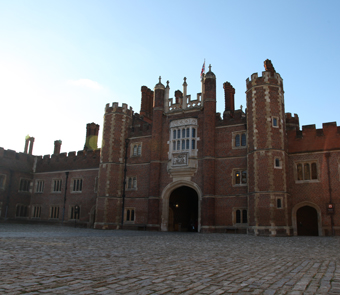 Enter the ultimate pleasure palace, Hampton Court, for a wealth of art and stories.

Hampton Court is the ultimate royal pleasure palace — embodying the indulgent and grandiose kingship built by Cardinal Wolsey and developed by Henry VIII. Through its rooms, chart King Henry VIII’s decline from fit young warrior to bloated womanizer and recall the vivid stories of the ladies who became his queens. Learn how William and Mary demolished half of the Tudor palace to replace it with an exquisite baroque structure, making Hampton Court one of the most unusual palaces in the world. Go beneath the brick and stone of this true pleasure palace and now thriving tourist location to uncover an abundance of art and stories that bring Hampton Court alive.